skip to main | skip to sidebar

A Halloween finish - a little late....

Thank you - thank you for all your sweet comments, welcoming me back to the Blogging World. I really have missed this kind of contact with other stitchers and its so heartwarming to have you still coming back to my blog. I'm trying to make the rounds of all the blogs in my sidebar and slowly but surely I'm getting there.

I don't have too much to show for my week but my daughter Kelly sent me a picture of the the Halloween banner I made for her last month. 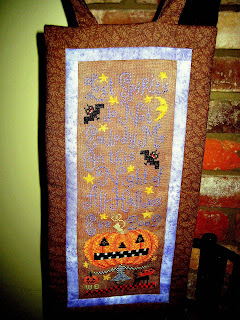 Its called Lost Spirits, by Birds of a Feather and its stitched on a piece of 28 ct linen called Fossil - I think its by Picture This Plus fabrics. Its a really gorgeous brown shade and I would love to get more of this, because I have a couple more Birds of a Feather Halloween charts and I think this works great. Don't you love the Pumpkinhead girl at the bottom!

This weekend can't come fast enough - Sunday is a stitching get-together at Clare's and it sounds like there will be a houseful. I'm taking my camera so I'll have pictures! Have a great weekend all!!

Labels: Birds of a Feather

Is it really November?

I'm back in blogging land! No real excuses as to where I've been or why - but I guess I found I had overloaded on responsibilities. Something had to give. And then procrastination set in....

I've been around and lurking and commenting here and there and stitching and quilting and knitting and reading to my heart's content! Well almost - work does tend to get in the way somewhat.

Wanna see some pictures? Because after all, that's what we are really about. If we can't do it all, we can at least look at pictures of people who stitch and quilt and knit wonderful things and imagine that we will some day too. 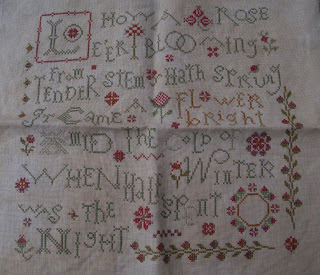 This is what I did on my summer vacation - really. Lo How a Rose - in a Christmas book that I begged, borrowed and pleaded to get because I had seen it so many times in so many places and I knew I had to make this one for myself. Luckily Clare had the book and she lent it to me just in time for my August vacation. It took about 8 days of dedicated stitching to make and Ta-Da - I'm in love with this piece. I used only DMC for it - no fancy threads here - and I dug out a piece of Lakeside Linens 36 ct linen that I had in my stash. I used one thread over 2 because I wanted a lighter, lacy feel for it. Its been relegated to my bag of finished pieces (BFP's) until I can scrounge up enough $$ to get this one framed. 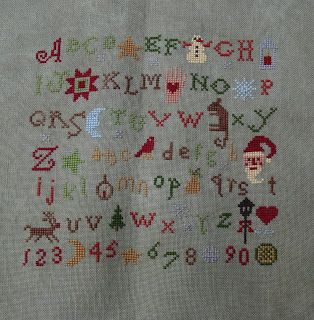 This is Yule Sampler by Primitive Needle. I finished it last week and I am still in shock that I got something done before a holiday took place, instead of my usual finishing of it after the fact. Again, DMC's, not the called for Crescent Colours, because although I have a healthy selection of CC's, I didn't have one bloody skein that was called for. This was done on Lakeside Linens River Willow 32 ct. Its such a cute little piece and I really enjoyed it. 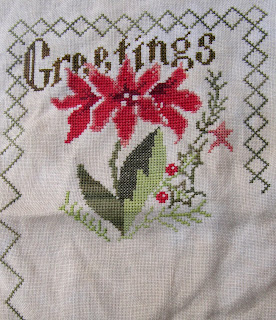 "Greetings" by Blackbird Designs, from their Peppermint& Holly book. I started this last week, using mostly GAST (with a little DMC, because of course I don't have all the ones that are called for). I'm using the rest of the Lakeside Linens piece of 36 ct fabric that I used for Lo How a Rose above, but 2 threads over 2 this time, for better coverage. Don't you just love BBD's!

And I finished up 2 Hallowe'en pieces, that have already been put away and given away....before pictures were taken (Gasp!). One day I'll get a picture of those. 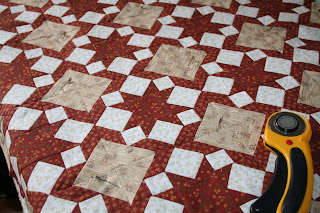 I made this wee quilt to actually hang something on one of the walls for a change! Its only going to be 24" x 36" when finished and its just waiting to be quilted now. I used the Square in a Square technique - classes that I have been taking with Marg since last January! The main quilt that we are making is a ways from being completed, although we only have 2 classes left. I have lots of very pretty blocks made but I was needing to see something finished so I got this one put together with one of my favourite blocks, I think called Ribbons. The urge for a new start isn't limited to my stitching - it takes over quilting too. This is the start of 'Log Cabin Squared' using two 'chelsea buns' from Sanctuary. Chelsea buns are rolls of fabric that are 1 1/2" strips from one fabric line, this one called Sanctuary. Really could the manufacturers make things any easier? But I wish they would get away from these yummy food titles for these things. 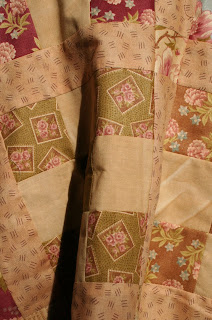 And lastly, a peak at something waiting to be quilted, using 2 charm packs from Blackbird Designs, called Beach house. 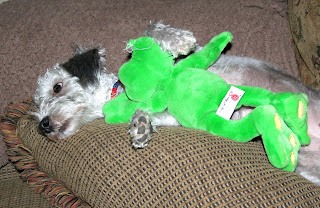 Whew, that was exhausting! Bella thinks so too :-D

Wendy
Ontario, Canada
Mom to 3 grown-up kids and 3 furry ones ...and Grannie to 3 sweet babies!

Visits from my friends